These are something I’ve had the idea for for a while but it’s been pretty dark. Today the sun was out, though there were a lot of clouds coming past, so the lighting kept changing, thus the different colours.

My noodle STILL needs a name, but I promise, I’ll get there. xD

END_OF_DOCUMENT_TOKEN_TO_BE_REPLACED

I got my Cuartosdolls Nebo last week and this is his/hers(?) first official shoot. I haven’t decided on a name (or gender) for him, but I’ll be getting there (I’ll change the tag once I’ve decided on the name). Wanted to get him home before deciding on anything and that’s good, since he is a bit too small to be paired up with a doll as big as Sigrun. I had this shoot in mind when I ordered him… or more like I ordered him because I could just see this shoot in my mind’s eye. Though, since his colour theme changed a bit and he’s smaller than imagined, it’s not exactly how I pictured it. The last poses are closest to what I had in mind. He’ll likely end up in the same story with my Withdolls because he’s better sized with them… more specifically Delmia. Oh, I already have plans…

But yes, I ordered him in very pale grey resin, but didn’t realize to say that I would’ve preferred him in the same opaque metallic resin as the darkhorns. Since the sample image was just his head I didn’t realize my mistake. But no matter: I corrected the problem by cursing myself to endless re-painting of his spines (it’s already scratched!). =___=;; By giving him colour, the translucency isn’t as prominent and I like him better. His colour theme had to change too, because silver paint was too cold. He is a very interesting colour: by himself and on my hands he seems very much white, but when he’s put with other dolls or on a certain colour background, he clearly turns grey. At last weekend’s meetup he seemed to camouflage himself into the floors of the room. xD

Oh and yes, Sigrun is the main lead in this shoot, she even has a new dress for it. :’D I’m sorry it’s a bit repetitive. It was sinfully hot again and it literally took me 4 hours to take 100 photos because I had to take several breaks inbetween just to not die.

END_OF_DOCUMENT_TOKEN_TO_BE_REPLACED

For once I took themed photos. Easter is on the agenda this time. I planned on doing some tiny!Himeno in the nest photos among others, but I already took the nest photos a few weeks ago because I wanted to try it. And the others I can’t really do without mizya, so… I made a random Easter story.

Himeno wants the nest for herself but runs into some… obstacles.
(Ea is afraid of round objects, thus the poking of the eggs to make sure they’re not completely spherical) 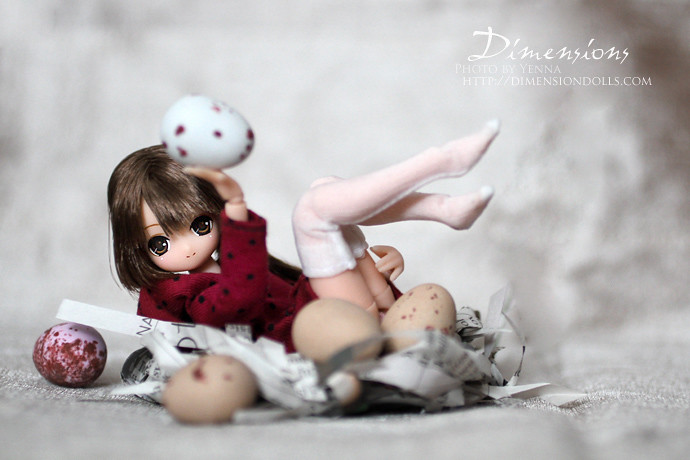 ^ This is from a while ago, but the story below is from today. :3 END_OF_DOCUMENT_TOKEN_TO_BE_REPLACED

These are all kind of similar again. Especially the Delmia photos because I was running out of light and camera battery. It was blinking quite a while before I stopped and then I just quickly snapped some close ups of her (which happen to be my favorite photos of these) hoping that the camera wouldn’t die on me.

Anyway, just executing an idea I had. Some more to come if the weather gets better -or if I could at least get some light indoors. :I I’m kind of sad that the pose where Prisca has her hip out nicely doesn’t really show in photos. Bad angles, I guess but I was paying more attention to other things.

END_OF_DOCUMENT_TOKEN_TO_BE_REPLACED

Some random single photos I haven’t posted here yet. :3

END_OF_DOCUMENT_TOKEN_TO_BE_REPLACED

More late posts. This time it’s Sigrun out in the forest. I actually made my way to this curved tree, that I often keep eyeing (because I can see it from my other photo locations) but I’ve only gone to it once before. It’s hard to get to: there used to be a path but two trees have fallen down and blocked it effectively. I had to go around them and it’s not easy going that way -especially in summer when it’s swampy out there. And during winter it’s a bit dangerous because of the holes between all the rocks. But that day the tree just called to me, so I went there. I followed some animal tracks (raccoon dogs and rabbits probably) and got there somewhat easily. :3

END_OF_DOCUMENT_TOKEN_TO_BE_REPLACED

Okay, so so so sorry these are horrid flash photos. I had no other choice and then I had to quit before I was even done because my flash ran out of batteries. And though I used every battery I could get my hands on, I wasn’t able to get more than a few extra shots. But I got most of what I wanted covered, so I guess it’s okay. Still sorry about the horrid quality. I wasn’t able to give Yami the expressions she needed because there were no proper shadows to play with. Stupid weather. I shot this a few weeks ago but didn’t really have the energy to write it up before now.

The Spider’s Lair was surprisingly cozy and glamorous. It even smelled nice and flowery.

Somnion had been expecting something dark and dank.

END_OF_DOCUMENT_TOKEN_TO_BE_REPLACED

This is sort of repetitive, but I got a package from Cuarto over a week ago and some weapon parts from Withdoll earlier this week and today was FINALLY a lovely day. No rain and no doom and gloom. I’ve also been eyeing this spot every day that I’ve driven past it on my way home from work. I just couldn’t resist. And I’ll definitely be shooting here more when the weather is right again.

END_OF_DOCUMENT_TOKEN_TO_BE_REPLACED

Okay, this took me a side of forever, but it’s finally done. Not entirely happy with it but I just don’t care anymore. x_x

Shall we get to it?” The demon inquired.

END_OF_DOCUMENT_TOKEN_TO_BE_REPLACED

I finally got myself a dragon. :D :D Well, Nion got himself one. I was supposed to get a coloured one (dark brown metallic) originally, but then I changed it to dark red metallic after seeing photos of that. I even received photos of the finished dragon,but then Cuarto completely dropped all communication with me and I just did not feel comfortable sending that much money to someone who takes weeks to reply even when they’re being fast. I get that they’re busy with sculpting the wings and making winged orders (for Russians that most likely jumped ahead of the preorder queue) but really, it doesn’t take two minutes to send an email to your customer. :/ And for the record, I waited for word on payment and shipping for 3 months, and the whole time the doll had already been cast, so it’s not like I didn’t give them time to get back to me.
In the end, I bought this white one second hand from the person who was helping me communitate with Cuarto. :3 She’s nicknamed “Sooty” for now, until I can do the story where she appears and Nion names her.

I got her yesterday but I spent the whole day painting and then restringing her. I didn’t really get to play with her at all before she fell apart… literally. I tilted the head back to look at the attachment and the elastic escaped. :D;; And then it took me hours to put her back together because I changed her into a lot thicker string that required some… interesting alternatives. She’s a bit tight though and I ran out of elastic, so I just put in an order for more. Not touching her stringing until then. I still need to paint the other head.

I’ve been planning this photo for months. I was already anxious to do it in March (which was when I received word that the red dragon was ready to be assembled and shipped) so I’ve really had time to plan it. Too bad my concentration wasn’t 100% on the pictures. I came back with a dozen mosquito bites on my butt and thighs. The suckers are distracting and I only had repellent on my upper body. But oh well, I’m quite happy with these… Once I’ve re-strung Nion I might take more with different poses. This time my priority was to get one shot.